Background:The fifth week and final week of trampoline training to see how trampolining skills can transfer to freestyle snowboarding by improving my level of proprioception

The Session and what was covered:

For those following each week, Apologies for the absence of a write up last week but unfortunately I had to skip the session due to a bad case of hay-fever and an ear infection….! But back this week and firing on all cylinders.

As mentioned in previous weeks, I was keen to try out some back flips and this was the main focus last night.

After warming up with some basic moves I switched trampolines and headed over to one with a harness above it. For the first few tries I was going to be hooked up to a harness while Mark (one of the coaches), controlled my decent. Quiet handy I thought as I didn’t really want to land face first on the trampoline.

The instructions were, to first jump and then feel as though the belly button is pointing toward the celling, tucking the body and keeping it all together rather than separating the head. What I mean by this is trying to keep the body in alignment, (well that’s the way I was trying to picture the whole thing), rather than a curved line where your head is preceding the flip. Of course the head would look into the new direction but not an over exaggerated curve of the spin.

Now when I first imagined myself doing a flips, I actually thought that I would jump and then throw my head back, followed by body and feet, but no. To stop any ‘drifting’ while in the air and to maintain a controlled ascent / decent, it is key to first jump and then rotate at the apex of the flip.

Obviously there are other movements going on here, like tucked leg, using the arms and spotting the landing.

Throughout the session I was comfortably getting around 8/10 attempts but the problem area lie in spotting the landing earlier enough. Sometimes I would get it, and other times not, usually spotting too late to be honest. The feedback I was getting was that I needed to tuck more and complete the rotation earlier, which would then allow me more time to spot the landing and, if needed, open up to slow the rotation down.

I got a few like this which felt super nice and keen to get back on it next week.

The transfer to snowboarding

Now going back to the head preceding the body, it’s a really interesting point with the whole, jump first then rotate. I think this relates to where a lot of people go wrong when trying out their first back flip on a snowboard.

When you see people doing back flips, say on the beach or in a park, they rarely start and land in the same spot. Most of the time drifting backwards or forwards slightly.

The other major different is of course while on a snowboard we are standing side on, where as when doing it on a trampoline we facing forward. (on a snowboard this type of spin may be called a barrel role or something similar).

However, these movements can be related as we are still going upside down. So, if drift backwards or forwards while doing a back flip on a snowboard over a jump, there is the possibility of: A: catching the lip on take off, B: drifting back and not making the landing.

From my experience the common one would be to drift backwards. So the following advice from a mate may not be of best value…

…just go as fast a you can, then when you leave the jump, go for it and throw you head back…

Have a look at the following video below and let me know if you think the above statement is of value, (although it is questionable whether or not this guy was actually going for a back flip or not – either way, do you want to throw your head back).

Now while the above guy threw his head back to early, have a look at the following back flip. Another disadvantage of throwing back to much is that the board becomes light and shoots out from under you.

Ever gone for a huge tail press and end up going that little bit to far with the head? Next thing you know you’re on your bum as the board whips out from under your feet. This is a classic example of such an event. (read How to Tail Press on a Snowboard for an insight to good form for the tail press)

Looking forward to next week to try out / experiment some more with the back flips and will be talking more about my findings. Still trying to get my head around (no pun intended) the timing and movements. 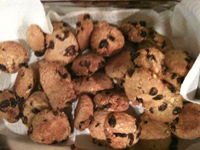 How to make Cookies’ for the hungry snowboarder It’s been a while since I wrote a post so I thought this would be a nice change. Designed specifically for the…