Last week I was up at Hemel snow centre coaching for Definition Camps for their 1 day kicker freestyle session.

One particular trick that everyone wanted to get down was the frontside 180. We also covered how to be more stable in the air in reference to both 180 and 360s’. Later that evening in the bar, after staying for a ride, I was also asked by a friend how to prevent over rotation while in the air and this ties in nicely with the stability aspect.

This weeks Tips Monday is going to be about the set up and exit off the lip when doing a rotation (specific to frontside rotations off the heel edge, but can also be applied to the backside rotations) and how to feel more controlled in the air.

Last weeks Tips Mondays – Snowboard Trick Tactics talked about tactics when doing a particular trick and this week we’re going to refer to the S (Setup) and T (Take off).

Stability in the air

Now while we all know that our ability to control and manipulate a rotation once you have left the ground and in the air air is limited, it would be nice to be able to hold a position. Say for example, legs up in a nice tucked position making a spin look clean rather than arms and legs dangling everywhere, board rotating to much, etc.

So, next time try this. After the initial rotation of the upper body into the spin, wait for the board to catch up with the upper body (roughly 90 degrees) and then hold. What I mean by this is to be strong with the lower limbs and core, keeping everything compact and together. Think of what happens if someone where to go to try and push you over but told you they were about to do so. You would pre-empt this and stay strong (not tense or rigid, but strong in your center).

You are now in a good position to: 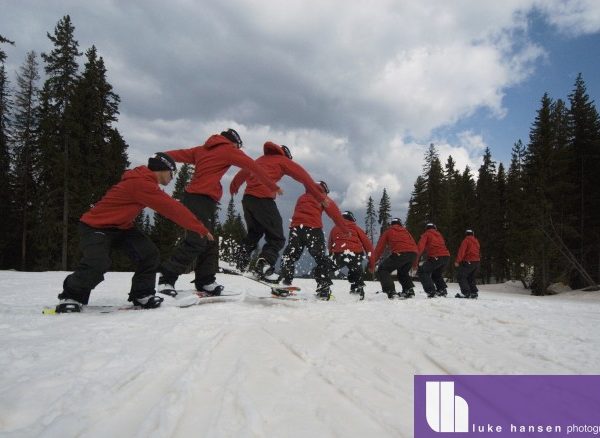 How to Frontside 180 on a snowboard – Toe Edge

A visual tutorial on how to do a frontside 180 on a snowboard off the toe edge.

I have decided to share some knowledge with those interested in learning (or perfecting) the following tricks: – Ollie – Nollie – Tail Press – 180 (four different variations of…