One of the biggest problems I see with 360 rotations (more so with frontside off the heel edge) is slipping out or skidding on the lip just before take off.
Be sure to check out last weeks post on 180’s as I refer to certain points made in it.

Stability in the air

As for the 180, we were waiting until the board caught up with the upper board before tensing with the core:

” …after the initial rotation of the upper body into the spin, wait for the board to catch up with the upper body (roughly 90 degrees) and then hold. What I mean by this is to be strong with the lower limbs and core, keeping everything compact and together. Think of what happens if someone where to go to try and push you over but told you they were about to do so. You would pre-empt this and stay strong (not tense or rigid, but strong in your center).
This is the type of feeling we want to replicate whilst in the air
You are now in a good position to:
Move the board quickly under your feet if you have under rotated the spin
Hold your position longer, controlling and/or delaying any needed rotation – say for a late backside or frontside 180…

The above quote was taken from the following post: Tips Monday – 180 Rotation & in Air Stability

Now with our 360s, the same is happening here. Thinking about being strong in the core early during the spin.

This will lead to a good progression for grabbing as you will be able to hold you legs up for longer, resulting in cleaner and smother rotations.

Take a look at the following video clip – I know it’s fairy short and not the best quality, but it illustrates a couple of the points I made above.

You can clearly see the skidded take off. This comes from no grip with the back foot. The board slides out and away from the rider. Resulting with a slightly off axis rotation with the back foot now higher than the front

We want to take off from both feet, using the entire length of the snowboard edge but with added focus on gripping with the back foot. (thinking about lifting the toes up on the back as we ride up the transition). Creating and feeling the edge as we leave the lip.

We can also see that the board is still rotating when the rider lands, so much so that it is very likely it will revert to switch. This is down to lack of in air stability and control over where the board is in relation to his upper body. Then again, due to the sliding and off axis rotation created by the lack of grip on the take off, it make it very hard to control.

So you can see that a lot has to be said about the run in and set up for a jump or specific trick and understanding where and how we can get the grip and platform to push off to produce smooth spins. 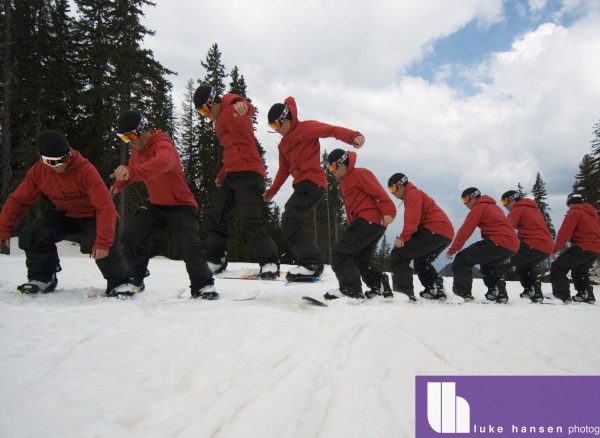 How to Backside 180 on a snowboard – Toe Edge

A visual tutorial on how to do a backside 180 on a snowboard off the toe edge.