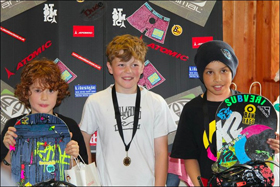 It’s been a couple of weeks now, but back on the 16th of July Bracknell Dry Slope played host to the final round of the Southern Freestyle Series.

Congratulations are in order to Will and Cerys, who both finishing in podium positions. Cerys claiming first place with a gold and 3rd place in the previous two rounds.
A special event for young Will too (only just 8yrs old) finishing 3rd in the under 14’s category at his first ever snowboard comp too! Pictures from the event

Also a big well done to: Jack, Skyla, Will and Cerys for all reaching the finals at the Trick Buster Jam put on by For Boarders by Boarders at Milton Keynes on Saturday 23rd July.

Finally, here’s a short video of when Jamie Nicholls decided to join in on Jake Terrys Birthday Bash early this month at Hemel.

A total of 12 how to articles on snowboard freestyle tricks are now in the Freestyle Tips and Tricks category, each with their own step by step instructions / pictures…

Last week saw me joining in with the morning commute as I headed up town for my 2 day sports first aid course with React First. Having been first aid…