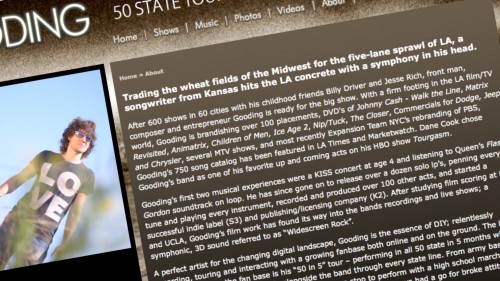 The first time I met Gooding was in California back in January 2003. I had just got off a 10 hr plane journey from London and the following day was about to start my first ever winter season – wow, how time has flown.

I was staying in Long Barn for one night before heading up to Cold Springs where I would spend the next 3 months working at Dodge Ridge Ski Resort, CA.

I had the pleasure of meeting and listening to Gooding in a jam session that evening. One of my, to be, work colleagues was also there, an Australian named Pip on piano.

I ordered a beer, sat back and watched as Pip and Gooding chatted over by the piano. Gooding disappeared and moments later reappeared with his guitar, they both started playing and after some time, a local joined in on harmonica. I was lucky enough to get given a copy of the album ‘Life Itself’ – wonder if Gooding remembers it?

An experience I’ll never forgot and still tell it to friends when reminiscing about old seasons. Since then I’ve followed the bands progress and success over the past 8 years.

Head over to their site and download the latest album. You won’t be disappointed.

All the best guys – keep up the good work.

Check out the following video by Tim Humphreys. A collection of footage shot POV style, using a GoPro HD Hero, edited and put together by Tim himself.

If you haven’t yet heard the hype about the Synergy Snowsports Park Tour happening next month then listen up. From the 14th – 20th of March Synergy will be Davos…